Friday the 4th of December 2015.
Because of a lack of time in the November meeting, a demonstration of Fritzing was provided. Fritzing is an (open source, free software) German produced application which gives the experimenter, tools to create images of breadboard wiring, a schematic, PCB design, program code and the ability to export a Gerber file and a BOM (bill of materials) listing.

Friday the 13th of November 2015  Peter Gheude and Eric Clarke presented an Arduino assortment of projects, including:- Peter, showing the functions of a Logic analyzer and Bus Pirate hardware. Eric demonstrated some of his projects. Unfortunately, due to leaving a power pack and some C libraries at home (was it really Friday the 13th), he could not complete the demonstration.  Video clips were shown, including an Octocopter in action with a human payload, a multi-voiced (six separate channels of sound) music player using an Arduino Diecimila (with 328P chip) /Uno / Nano etc. A range test of an nRF24L01+ 2.4Ghz Arduino compatible transceiver and an Arduino controlled milling machine.
Download PDF of Peter’s demonstration.

Friday the 9th of October 2015 Philip Kocent gave a brief presentation on a previous version of the Retro Pi and plans to give a presentation of the new version at a later date.  He had purchased the newer version but unfortunately it did not arrive in time for the meeting.

Peter Gheude made a suggestion that we all embark on learning about programming an Arduino as a club project. This could give everyone a “leg up” and some practical experience.  Peter brought along the Arduino Nano pictured below and Eric Clarke gave a quick demonstration of how to program it using the latest version of the Arduino IDE which Peter had installed on his notebook. Eric plans to give a more in depth “tutorial” at our next meeting and he suggested several presentations he could give at future meetings.

Stephen Knight discussed his experience with Windows 10 and said he was going to take more interest in Linux after his experience.

Friday the 11th September 2015
Raspberry Pi was displayed in three different configurations by members. Phil Kocent had a preliminary mock up of his RetroPie running several 70’s style games. Peter Gheude was networking with a Pi together with his mobile phone and Eric Clarke had a Pi model B running Raspbian – Wheezy Linux with OpenELEC5.0.0/Kodi14.0 video player application.

Friday the 14th of August 2015
Peter Gheude demonstrated a network interconnecting an Udoo module with an Uno module. Each of these modules consist of an ARM CPU section that boots to any of a range of Linux operating systems. Both modules also include  Arduino type hardware.  This enables users to run a conventional GUI interface with screen, keyboard and mouse on the ARM based section that can then be used to program the Arduino sections to control any of the normal range of Arduino  “shields” that may contain timing sensitive tasks that the ARM sections can not handle properly in real time. These are the modules that are suggested for future group projects. 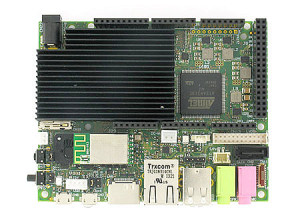 Pre: FRIDAY JULY 10, 2015 – General meeting to discuss Group Project Proposals. Following on from Peter Gheude’s proposal for a group purchase of Udoo modules ( pronounced you do), Peter will be expanding on the purchasing arrangements and pricing. Also a presentation on the new SAMG web site with details and ideas on WordPress by Eric Clarke. Eric has had some experience setting up a couple of WP sites since 2011 and has also dabbled for the last two weeks with Joomla. There will be a brief segment to round off a comparison between WP and Joomla.

Post: FRIDAY JULY 10, 2015 The meeting commenced with our treasurer announcing that fees were due for the year 2016. Many members took this opportunity to pay their $5.00 yearly fee. The formal part of the meeting kicked off with a presentation by Eric Clarke on the SAMG’s new web site and its current structure using WordPress. After the Powerpoint tutorial, requests were made to have the contents made available on our site. Click here to view the PP presentation.
Peter Gheude revealed the results of a questionnaire  he drafted and posted out to members in  May 2015. Some very interesting responses were tabled for members to peruse. Click here to download as PDF: